The history records the operation of several theaters in Juiz de Fora in the nineteenth century. At first, they were crude stages armed in free lands, scenes of half-assed presentations. Soon, it is seen local leadership initiatives to provide better facilities for the viewer.

Barão de Bertioga built, with slave labor, the Misericórdia Theater, in 1863, considered one of the first of Minas Gerais, but still precarious. A little later, in the early 1870s, it was the turn of the merchant Carlos Otto to erect the Perseverança Theater. Finally, in 1889, the brothers Ferreira Lage, sons of the pioneer Mariano Procópio, inaugurated the Juiz de Fora Theater, which for a short time was called Novelli Theater, in honor of an Italian actor who performed there. Of all, this one was the best, with its golden chairs and foyer with crystal mirrors, but still it was small and less than expected for the cultural ambitions of the city.

Only 40 years later, with these spaces already missing, Juiz de Fora would win its definitive theater, the Cine-Theatro Central. The first step for the construction was the foundation, formed by Francisco Campos Valadares, Químico Corrêa, Diogo Rocha and Gomes Nogueira, in June 1927, of the Companhia Central de Diversões. 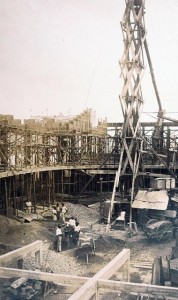 A year earlier, they acquired the iron shed and zinc tiles of Polytheama, another precarious theater in the city, installed on the ground between São João street and the old Califórnia street, now Halfeld, and demolished to give way to Central.

It was up to the construction company of Pantaleone Arcuri, who had already begun to change the architectural face of Juiz de Fora, to design the new theater. Raphael Arcuri, the architect, did not economize on grandiosity and the budget eventually surpassed the financial possibilities of the company, an obstacle surmounted by a providential measure – the Arcuri’s own patriarch’s entry into the partnership.

Thus began the construction of the Central, a contract that would take a year and four months of works. It would not be the tallest building in Juiz de Fora, nor its first building in reinforced concrete, but undoubtedly a daring enterprise, in which the wide, unpaved section of the audience stood out, supported by a metallic structure from England, which frightened the less informed about this bold architectural solution – a “triumph of technique”, as it would come to be hailed. 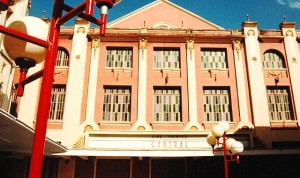 The building of sober and straight lines, and discreet front facade, won sumptuous interior artistic ornamentation, signed by the Italian painter Ângelo Bigi, settled in Brazil. Bigi sensed that this would be his great work. He bequeathed to the Central a decoration with a taste of classic antiquity, with scenes of nymphs and fauns in romantic and paradisiac gardens, a mythological Arcadia that exudes peace, harmony and happiness. In the center, medallions with the effigies of great masters of music: Wagner, Verdi, Beethoven and our Carlos Gomes. Finally Juiz de Fora could be proud of having a theater worthy of its economic, political and cultural importance.