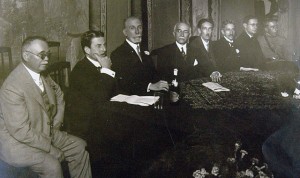 It is possible to imagine the shiver of pride and enchantment that certainly took hold of all those who attended the opening party of the Cine-Theatro Central on March 30, 1929. All the splendor and beauty of the new theater glowed in the paintings of Ângelo Bigi and in the illumination of the crystal chandeliers, which welcomed the admiring gaze of those present. There was a victory of the society juiz-forana, the concrete proof of its refinement, a temple of culture that would put the city in the route of the national and foreign cultural productions. Figures of the local high society and authorities like the president of the province in person, Antônio Carlos Ribeiro de Andrade, honored the solemnity that featured an orchestra performance and the screening of the silent film, in eight acts, “Esposa Alheia”. The party reverberated beyond the limits of the municipality. The moment that entered to the history of the city was duly registered in the Revista Central, a commemorative edition that greeted the sumptuousness, the “formidable acoustics”, the security and the comfort finally placed at the disposal of the demanding juiz-forano spectator.

Located in the heart of the city, in its most beloved artery, Halfeld street, despite being a private initiative, the Central would play the role of municipal theater, the elegant and technically suitable for the presentation of the great spectacles space. One of the largest theaters in the country, with its almost two thousand seats, would also be one of the most beautiful and one of the few buildings in Brazil with infrastructure for assemblies as diverse as theater, opera, ballet and concerts. With this profile, the stage of Cine-Theatro Central would receive, in the following decades, some of the most prestigious national artists of music, theater and dance.