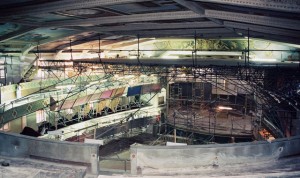 It would be necessary to remove layers of paint, dust, mildew and neglect to rediscover the splendor of the Cine-Theatro Central of the past. The rescue of an patrimony like this was complex and demanded specialized labor and resources that would only be met with the commitment of many sources.

The path opened up with the inclusion of cultural space in the Cultural Incentive Program, the Patronage Law, which enabled the financial support of large companies to the restoration project, benefiting, in turn, from tax incentives. It was not long before all funds were raised and the reform, estimated at approximately R$ 2 million, began in January 1996. 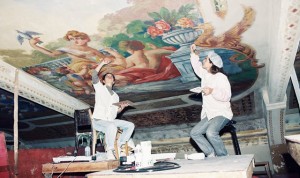 The recovery was under the responsibility of the specialized company Espaço-Tempo, Belo Horizonte, winner of the competition held to contract the restoration. For more than eight months, four professional restorers coordinated the work cells of teams formed by arts, architecture and urbanism students from the Federal University of Juiz de Fora, which were balanced on a 500 square meter platform for the task of cleaning, fixing and restoring Angelo Bigi’s paintings on the ceiling.

Under no less than seven layers of paint, the curators located in the foyer of the theater four female figures who were part of the original artistic ornamentation, authored by Bigi, but for a long time hidden and, therefore, unknown to the current public. The removal of paintings from the walls also revealed decorative designs by the Italian artist on the stairs, on the balcony and at the mouth of the scene.

All the work, which was closely followed by the Institute of National Historic and Artistic Patrimony (Iphan), included constructions to recover the building, with a roof changeover, remodeling of electrical installations, armchairs and cabins, installation of equipment and scenic mechanics, which put the old theater’s gear into operation again. 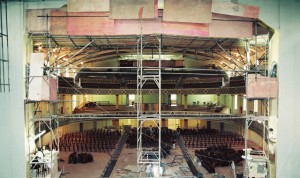 The Central was ready for another night, seven decades later, when, on November 14, 1996, the cine-theater was officially re-inaugurated. There was, in refreshed colors, the great temple of the culture of Juiz de Fora, one of the greatest architectural patrimony of the city, the definitive stage of great emotions and artistic creation.